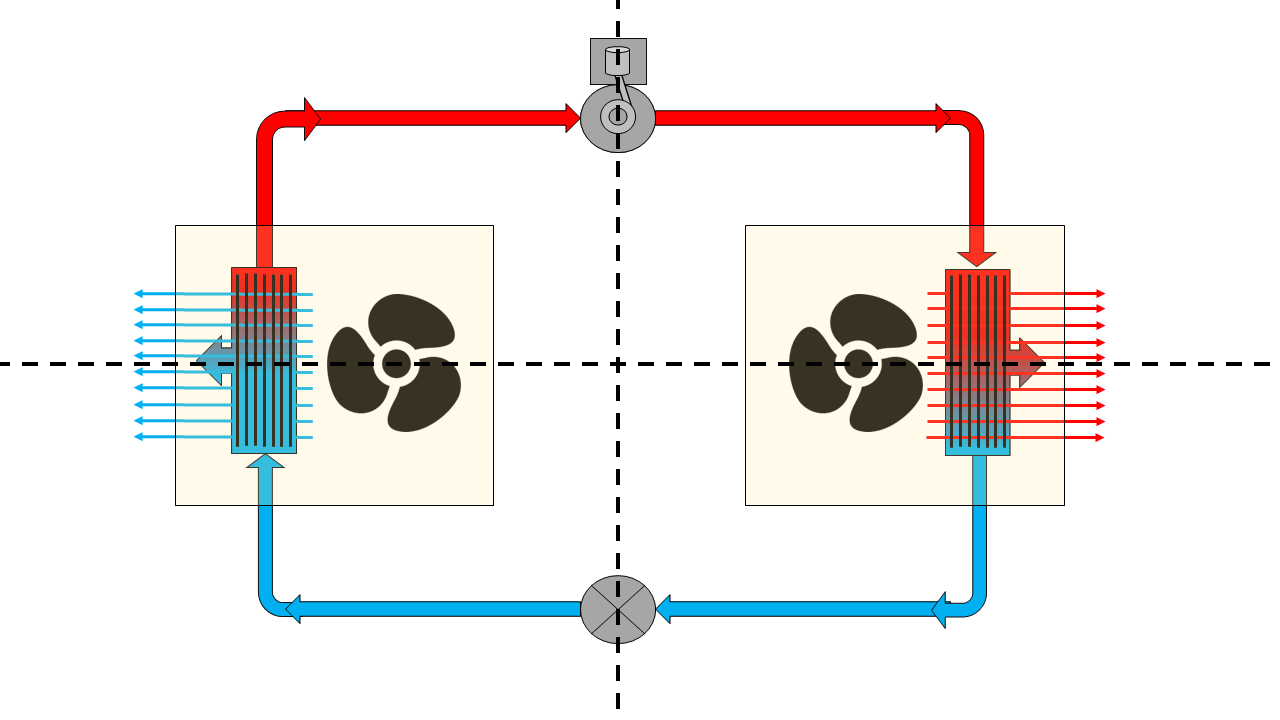 The Refrigeration Cycle is a simple but amazingly clever and useful process.

In its simplest form, the refrigeration cycle consists of just 4 basic components to complete the circuit:

That’s it. Well, that’s almost it – we also need a refrigerant to cycle inside the circuit.

So let’s have a brief look at each of the components in turn. Luckily, their names are quite self explanatory:

The Compressor can be thought of as the heart of the process.
It acts like a pump to create the circulation by compressing the refrigerant gas, creating a pressure difference that drives the refrigerant around the circuit in a continuous cycle.

The Condenser cools and condenses the refrigerant gas coming from the compressor in to a vapour and finally in to a liquid.

The Evaporator evaporates the liquid refrigerant in to a vapour and then in to a gas before it gets back to the compressor.

Here are some examples of these components and what they look like:

The condenser is often referred to as the ‘outdoor unit’, and that’s usually where you will find it – outdoors, mounted on the floor, wall or roof. In most air conditioning and smaller refrigeration plants, the outdoor unit will house the compressor, condenser, various electronics and in some cases, the restriction (metering device) too.

The vast majority of all modern refrigeration & air conditioning systems will use one of these 3 types of metering device.

Capillary tubes are simply a length of very narrow tube that causes a restriction to the flow of refrigerant.
They are most commonly found on small refrigerators like you have in your home.

Electronic metering devices, more commonly termed EEV’s or EXV’s (Electronic Expansion Valves), are a more modern and accurate version of a TEV. They are electronically controlled through data provided by an electronic temperature sensor, and can open and close multiple times every second to allow very precise control of the amount of refrigerant entering the evaporator.

To help understand the job of the Restriction or Metering Device, it can be loosely compared to the nozzle on an aerosol spray can.

The Evaporator is often referred to as the ‘indoor unit’, and that’s usually where you will find it – indoors inside the room being cooled (or heated in the case of heat pump air conditioning). They are usually mounted at high level on a ceiling or wall.

The Evaporator & Condenser coils are basically the same type of construction.
A long length of pipe work surrounded by aluminium fins.
They are essentially heat exchangers, similar to the radiator in a car.

There are many types of refrigerants and refrigerant blends. Different refrigerants have different properties to suit the application – Air Conditioning, Cold Rooms, Freezers etc.
Refrigerants are usually referred to by an ‘R’ number, for example R32, R410A, R422D, R507.
Propane (R290), Ammonia (R717), and CO² (R744) are also currently used as refrigerants.

Before we go any further, it’s important to understand what refrigeration actually is:

The term refrigeration means cooling a space, substance or system to lower and/or maintain its temperature below the ambient one (while the removed heat is rejected at a higher temperature). In other words, refrigeration is artificial (human-made) cooling.

The important part of this definition is the removed heat. Something that you perceive as ‘Cold’ is lacking ‘Heat’.

Heat is relative – what do you consider hot?

One very important aspect to grasp when understanding the refrigeration cycle is that heat is relative.

We tend to think of heat in terms relative to our everyday experiences and situations.
At 30°C we think of it as being a BOILING HOT day!
When we take a dip in the 16°C sea on that hot day it feels positively FREEZING!
So with a difference of just 14°C, our perception of heat has gone from BOILING to FREEZING!

But when we look at those temperatures in relation to other temperatures, the reality is very different.

If we look at the temperature of the sun at 5,500°C, our 30°C HOT day, in relation, is positively chilly. And likewise, liquid nitrogen at -200°C, makes our FREEZING COLD 16°C sea seem BOILING HOT!

When we think of the term ‘BOILING’ we instantly think of water in a kettle boiling at 100°C. We instinctively associate boiling as being 100°C. But it is important to understand that this only happens with water, at sea level, where the atmospheric pressure is at 1 bar. If we were at the top of mount Everest, where the pressure is only 0.34 bar, our water would ‘boil’ at 71°C.

The effect of reducing the pressure to reduce the boiling temperature of water is brilliantly demonstrated by boiling water at room temperature by placing the water in a vacuum:

From this it is important to forget your connection of boiling = 100°C and think of boiling as being a CHANGE OF STATE from a liquid to a gas. Some refrigerants can ‘boil’ at -40°C.

This relationship between PRESSURE & TEMPERATURE is a key factor in the refrigeration cycle process.

The changing of state within the refrigerant, from a liquid to a gas, is achieved by manipulating its pressure.
Under high pressure the refrigerant remains in its liquid state, and when the pressure is reduced the liquid refrigerant begins to ‘boil’ and change in to a vapour or gas.

If we return to the refrigeration cycle with the aid of some diagrams, we can see how these pressure changes causing changes of state within the refrigerant actually happen.

The Refrigeration Cycle – Transfer of Heat:

Subcooling is important as it ensures only pure liquid makes its way to the metering device. This maximises the capacity, efficiency and reliability of the system.

So, looking back at our completed refrigeration cycle diagram, let’s describe the process in full:

And there it is. The refrigeration cycle in its most basic and understandable terms.

10 thoughts on “The Refrigeration Cycle”