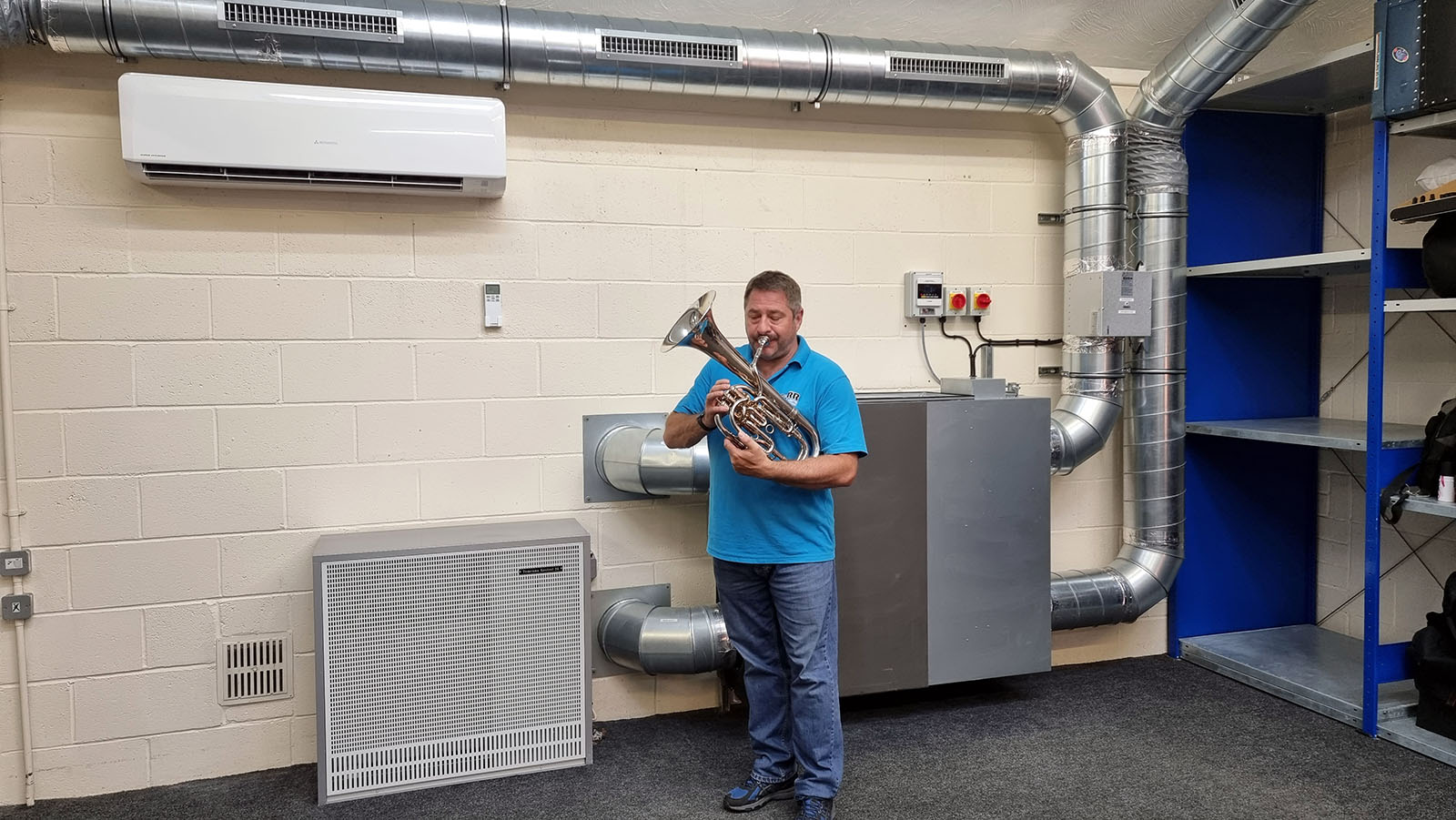 Torr were delighted to be contacted once again from members of the brass banding community – this time a little further from home, down in Milton Keynes, home of the Woburn Sands Band.

Woburn Sands Band has a long and well documented history. In its earliest incarnation, the ‘Brass Band of the Temperance Recreation Club’ was formed by Mr Frederick Croxall Boultbee in 1885.

The band performing at Aspley Guise Square in 1927, just a few hundred yards down the road from the band’s current rehearsal facility in Dene Close.

More on the band’s history here.

The current day band have a fabulous purpose built facility for their rehearsals, but like many band rooms across the country, the ventilation system was opening a series of windows.

And while opening windows does aid ventilation a little, it’s not ideal when it’s freezing cold outside, nor is it practical on hot days when you have air conditioning as the lovely cool air just disappears out of the window.

That is why the committee made the wise decision of installing a heat exchanging ventilation system alongside a new air conditioning system – giving the best of both worlds.

The 10kW wall mounted Mitsubishi air conditioning system, capable of both cooling & heating, keeps the band room at the perfect comfortable temperature, whatever the weather is doing outside, while the Mitsubishi SAF ventilation system brings in 1,000 cubic metres of fresh, filtered & tempered air every hour. At that rate, the entire volume of air in the band room is replaced with fresh air every 9 minutes; Perfect for a room full of ‘blowers’.

The clever part of these combined systems running in tandem comes from the ventilation system’s heat exchanging capabilities. It uses the stale air being removed from the room to ‘temper’ the incoming fresh air. This means that in summer, when the air conditioning is on and the room is cool, stale cold air being removed from the room is used to cool down the warm incoming fresh air, so the energy used by the air conditioning system cooling down the room is not wasted but harvested for free to help cool down the warm air coming in from outside.

This system works in reverse also. So in winter when it’s cold outside and the air conditioning system is warming the room, the heat exchanger in the ventilation system uses the warm air being drawn out of the room to warm up the cold fresh air from outside before it’s delivered back in to the room.

Like all new installations, we start by ‘getting the gear in’, and we have quite a lot of gear!

And without delay, it’s on to the installing. (Well, after one of Jane’s lovely cups of tea).

With the supply air ducting all in place, Day 2 is all about getting the air conditioning system piped up and getting the high level exhaust air ducting in, (the part of the ducting that sucks the air out of the room).

Once the installation was complete, the end of day 2 & morning of day 3 is taken up with wiring & commissioning the system.

The Woburn Sands Band opted to have an additional ducting heater bank installed. This small additional heater within the ducting boosts the incoming fresh air temperature on particularly cold days. The little 3kW heater is capable of boosting the air temperature by up to 10°C, with further heating achieved by the heat exchanger in the ventilation system.

And upon completion, it’s time to hand the new installation over to the folks at Woburn Sands Band.

Garry gives the committee members his instructional run through of the controls and how the system works.

Just one last thing to test… The Acoustics!

So finally, we’d like to add our thanks to the lovely folks down at Woburn Sands Band, with special mention to Jane for looking after us and ensuring the biscuit box remained well stocked! We hope you and the band get many years enjoyment from your new systems.

For more information on the band you can email them at woburnsandsband@btinternet.com
Or why not take a look at their Facebook site, they’d love to hear from anyone wanting to play in the band or beginners wanting to learn a brass instrument for the first time.

For more information on our refrigeration, air conditioning & ventilation services, you can contact us at Torr here.