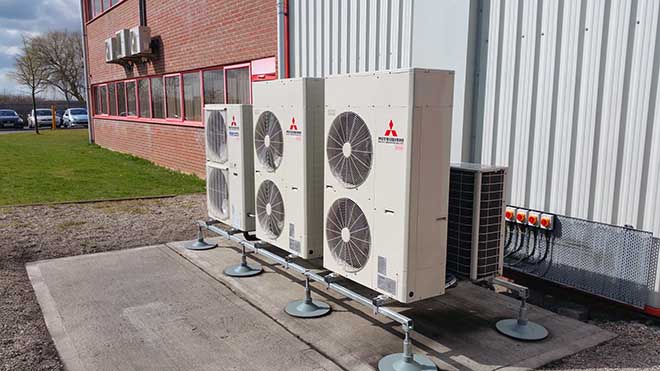 The system was 20 years old and had suffered a number of age related part failures. As a result the decision was made to renew the system rather than invest any more on the old one.

The new install would consist of a number of smaller systems to limit the disruption in the event of the failure of any one system in the future.

The old system which was floor mounted to a concrete plinth, was decommissioned and removed to make way for a big foot mounting system for the new condensers. The big foot system raises the condensers off the floor helping prevent the condensing coils from becoming fouled up and loosing efficiency.

Once cleared the existing concrete plinth was scrubbed clean with bleach to remove a build up of algae and moss ready for the new install.

The new Mitsubishi Heavy Industries equipment was installed with all new pipe work and interconnecting cabling throughout the building to each of the indoor cassette fan coil units. The system was split across adjacent offices so that if any condenser failed each office would still have 50% of it’s heating and cooling capacity still available.

The pipe work underwent a 48 hour pressure test to ensure there were no leaks on the network. After a successful test the pipework was deep vacuumed for a further 24 hours before the correct amount of refrigerant was weighed in.

Commissioning the new install was completed in a morning and the necessary staff were inducted on the system controls via the new Mitsubishi Eco Touch controller.